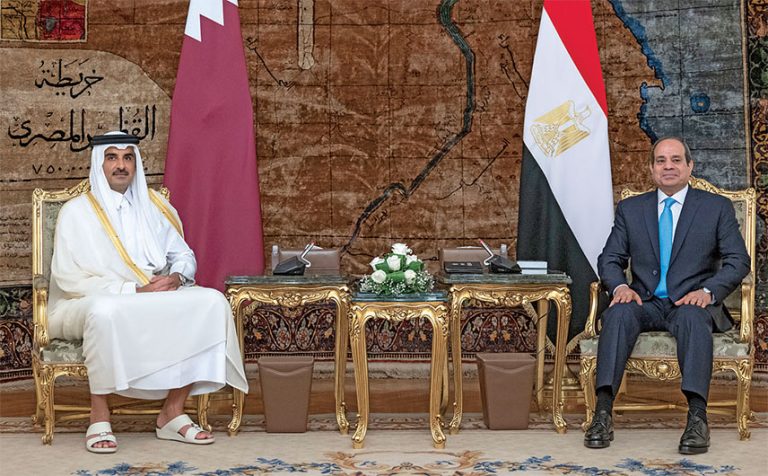 His Highness the Amir of State of Qatar Sheikh Tamim bin Hamad Al Thani and his borther President of the sisterly Arab Republic of Egypt HE Abdel Fattah El-Sisi held a session of official talks at Al Ittihadiya Palace in Cairo on Saturday.
At the outset of the session, the Egyptian president welcomed HH the Amir and the accompanying delegation, wishing HH a pleasant stay.
El-Sisi also congratulated HH the Amir on the anniversary of HH the Amir’s accession to power, praising the development and civilizational achievements made by Qatar during the reign of HH the Amir in various fields, praying the Almighty Allah to grant His Highness good health and wellness, and the Qatari people further development and prosperity.
The Egyptian president also stressed that His Highness’ visit is an important step towards developing bilateral relations between the two countries in various fields.
For his part, HH the Amir thanked the Egyptian president for the warm reception and hospitality, looking forward to strengthening cooperation relations in a way that achieves common aspirations, serves the interests of the two brotherly countries and peoples and develops them to broader horizons on various levels.
During the session, they discussed bilateral relations and the ways to enhance and develop them in various fields, especially in the fields of investment, energy, defence, culture and sports.
HH the Amir and the Egyptian president discussed a number of current issues in the regional and international arenas, and exchanged views on them, especially the situation in the Middle East.
The session was attended by the Personal Representative of HH the Amir HH Sheikh Jassim bin Hamad Al Thani, Deputy Prime Minister and Minister of Foreign Affairs HE Sheikh Mohammed bin Abdulrahman Al Thani, Chief of the Amiri Diwan HE Sheikh Saud bin Abdulrahman Al Thani and Minister of Finance HE Ali bin Ahmed Al Kuwari.
On the Egyptian side, the session was attended by Minister of Foreign Affairs Sameh Shoukry, Minister of Finance Dr Mohamed Maait, Minister of Planning and Economic Development Dr Hala Elsaid.
HH the Amir and the Egyptian president held a bilateral meeting, in which they discussed aspects of supporting and developing the strong brotherly relations between the two brotherly countries, and all issues of common concern.
Earlier in the day, an official reception ceremony was held for HH the Amir upon his arrival at Al Ittihadiya Palace in Cairo. HH the Amir was received by the Egyptian president.
The ceremony began with the playing of the Qatari and Egyptian national anthems, after which HH the Emir reviewed the guard of honor, then His Highness shook hands with members of the Egyptian official delegation and senior officials. The Egyptian president shook hands with members of the official delegation accompanying HH the Amir.