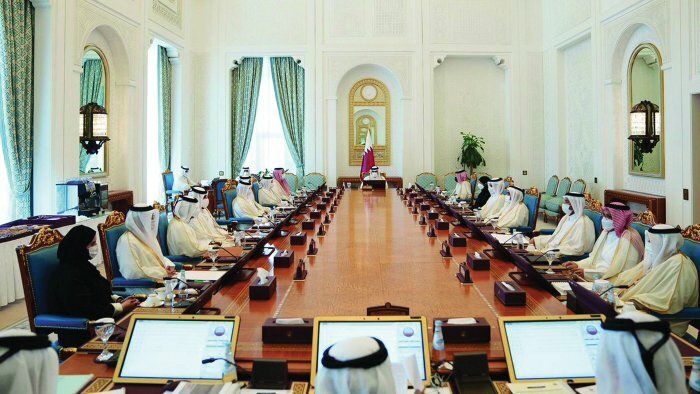 The Cabinet has praised the outcomes of the visit of His Highness the Amir of State of Qatar Sheikh Tamim bin Hamad Al Thani to Iran on May 12 followed by visits to Turkey. It also welcomed the outcomes of the talks HH the Amir held in Tehran and Istanbul, which reflected the depth and strength of ties between Qatar and the two countries.
The Cabinet, chaired by Prime Minister and Minister of Interior HE Sheikh Khalid bin Khalifa bin Abdulaziz Al Thani, also welcomed the outcomes of HH the Amir’s European tour that began on May 15 and included visits to Slovenia, Spain, Germany, and the UK.
The Cabinet said it was satisfied with the success of the tour on all fronts, the understanding shown in the meetings HH the Amir had with European leaders, and the commitment from all sides to enhance bilateral cooperation and strategic partnerships in all fields.
The Cabinet said that the tour, which came at an important time in light of regional and international developments, garnered a lot of attention that reflected Qatar’s place on the international stage and its vital role in global peace and stability that’s based on dialogue and the peaceful settlement of conflicts.
The Cabinet also praised HH the Amir’s participation in the opening session of the World Economic Forum, which was held in Davos in Switzerland under the title “History at a Turning Point.” They also praised the content of HH the Amir’s speech which promoted a global goal of peace, security, justice, dignity, cooperation, trust, and mutual respects between countries and peoples.
The Cabinet said that HH the Amir’s participation and speech in a panel discussion on the FIFA World Cup 2022 titled “Sport as a Unifying Force” has provided perspective on the event’s important cultural and humanitarian aspects, and highlighted its role in uniting peoples.
The Cabinet reviewed the semi-annual report from President of the Planning and Statistics Authority and head of the Permanent Population Committee on implementing the recommendations of the committee of population and took appropriate decisions on the matter.
This committee, in coordination with the competent authorities, undertakes the study of the demographic structure, its characteristics and trends, the proposal of the state’s population policy and the follow-up to its implementation after its approval, the preparation of studies and research related to the population, aimed at knowing the social reality in the state, the development of population policies and programmes, and a number of other tasks.