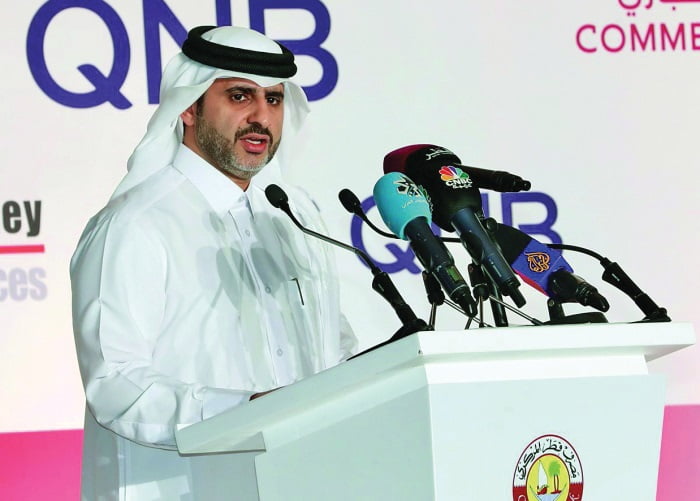 Under the patronage of Prime Minister and Minister of Interior HE Sheikh Khalid bin Khalifa bin Abdulaziz Al Thani, the 9th edition of the Euromoney Qatar Conference kicked off on Sunday.
In a speech during the opening ceremony, Governor of Qatar Central Bank (QCB) Sheikh Bandar bin Mohammed bin Saoud Al Thani said that the economic activity in Qatar today is much stronger than it was in 2020. He said Qatar occupies a distinguished position as one of the world’s leading countries in the production and export of clean energy of liquefied natural gas.
He said the country’s economy has proven strength and resilience despite the economic challenges imposed by the outbreak of the COVID-19, as a result of the directives of the wise leadership, and the economic and financial support plan that was implemented to assist the sectors affected by the measures to limit the spread of the pandemic.
He said Qatar succeeded in protecting society from the catastrophic effects of the pandemic by adopting a balanced approach and taking measures and pursuing policies in the field of public health, which allowed a smooth and safe return to normal life.
The QCB chief stressed that the conference presents great challenges for everyone today as the past two years witnessed events that indicate the difficulty of predicting the future, and the importance of the readiness and pro-activeness of central banks to confront those challenges.
He stressed that the existence of a flexible economy provides a strong basis that helps to plan for the future, as this flexibility is evident through the data related to the government budget and the current account, the official reserves of the state, and the strength of the financial sector, in addition to economic diversification. He pointed out that the prospects are still bright, as economic activity is recovering, driven by several factors, including the recovery in domestic demand, the growth of private sector credit, and preparations to host the FIFA World Cup Qatar 2022.
He said with the rise in global oil and gas prices, international institutions expect higher GDP growth in 2022 in the range of 3.5 percent, and on the other hand, inflation levels appear relatively moderate according to the global rates, noting that the current geopolitical tensions in Europe have not affected significantly on the levels of inflation, as it remained moderate. The QCB chief said despite the low risks associated with the pandemic, “we must stress the need to closely monitor the risks of supply chain disruptions.”
He stressed that despite the difficult challenges that the global financial sector has witnessed in recent times, Qatari banks still enjoy a good amount of capitalization, high liquidity and maintaining the quality of assets, and the profitability of banks has remained stable, while the percentage of non-performing loans is still considered among the lowest in the region.
Moreover, banks have been able to support their customers and borrowers during the pandemic, which confirms the strength and effectiveness of banking systems backed by the regulatory and supervisory framework, he added.
The QCB chief said according to the positive data achieved by the economy and the banking sector in particular, when evaluating the last stage, a decision was taken to start the phase of gradual exit from the banking sector support measures, as a plan was drawn up to end the facilities provided by the Central Bank to banks by the end of this year in conjunction with the interim assessment of the banks situation, interest rates were also raised in line with the policy of maintaining the exchange rate, with the continued emphasis on following up on everything related to global developments in order to protect the strength and safety of our banking sector.
He said explained that with the expectation that oil prices will continue at their current average rates, this will support the continued recovery in the country’s economic growth in the medium term, allowing us to absorb the cycle of financial tightening that has already begun by most central banks around the world.
He said the Qatar Central Bank is working through the initiative to develop the regulatory environment to enhance the digital society and the advanced financial environment, through which we seek to make Qatar a regional leader in the field of digital banking services.
He said that to meet the increasing payment needs of residents and visitors, the number of companies providing financial technology services has been increased in the experimental virtual environment before licensing them, ensuring that the companies are more efficient and secure.
The QCB chief stressed that — as part of the current update of the payment system programme— a fully integrated payments platform will be implemented, including a central infrastructure system for an instant payments network at the state level. He said the Qatar Central Bank is establishing the necessary infrastructure to enable banks to accept payments from digital wallets and in this regard, the bank is working on designing a new strategy for financial technology and intends to launch it during the last quarter of this year.