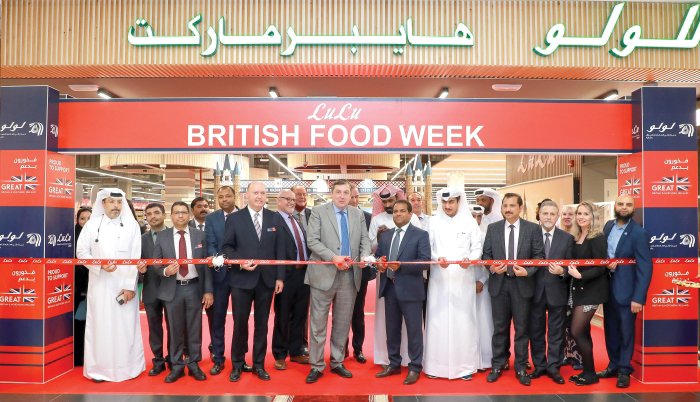 With the summer hotting up, Qatar’s leading hypermarket chain LuLu Group has again set the stage to explore major food and food habits of the United Kingdom by organizing a “British Food Week”. The festival, which comes as part of its year-round tradition of country-based festivals, always showcases the best of Britain.
The festival was hosted by the Group in association with the British embassy, and inaugurated by Ambassador of UK to Qatar HE Jonathan Wilks, at Lulu Hypermarket, Abu Sidra on Saturday in the presence of senior British Embassy Officials and members from Qatar British Business Forum. The event was also attended by Dr Mohamed Althaf, Director, and other senior officials from Lulu Group and many dignitaries from leading business groups operating in Qatar and other walks of life.
“We are looking forward to everybody coming Lulu to join British Food Festival as it is offering something for everybody,” Wilks said.
The festival, he added, is not only offering broad range of the products but there are a lot of new ranges such as glutton-free, lactose-free, low sugar, no added sugar and other healthy products.
“There are new brands in the market and those people familiar with and their favorite products as well on special deal.”
He said that customers can avail the offers of the festival to buy their favorite products and try the new products.
“Every year I participate in the opening of British Food Festival which increases sale of British products and interest of people in those products. Following the feedback of visitors, Lulu bring new and more products.
“We are also looking forward FIFA World Cup Qatar 2022 which will attract huge number of visitors, so Lulu is positioning itself to provide an open and friendly environment to fans for shopping during the mega sporting event.”
Director of Lulu Group International Dr Mohamed Althaf said, “We have been holding British Food Festival for last 10 years. This year festival is special because it is coinciding with Queen Elizabeth II Platinum Jubilee — 70 years on the throne celebration and visit of H H the Amir to the UK.”
He said the festival aims at demonstrating the new ranges of British products which are constantly increasing at Lulu outlets.
“Customers are already associated to the British products due to its high quality and safe food products. Our idea is to expand that range into more modern and innovative functional food items. The focus is to encourage people to eat healthy food items,” said Dr. Althaf.
He said that UK is one of the first governments which issued legislations on high fat, high sodium and high sugar contained foods to make people healthy.
“We make sure to follow same principle here by introducing those lines which are very healthy. UK also introduced many eco-friendly standards such as biodegradable packaging materials which help to ensure the sustainability and preserve the environment.”
Dr Althaf said that Qatari citizens and expatriates in Qatar are very familiar with the British food products which are one of the most diverse ranges in the world.
The festival will run at all LuLu Hypermarkets across Qatar till June 3, 2022, and shoppers will be able to make the most of the finest British summer treats, from a range of juices and bottled cordials to a wide selection of British cheeses, organic milk, flavoursome yoghurts, chocolates, biscuits, tea brands, and specialty breads.
Many British products were specially flown in to fill the aisles of LuLu, for this promotion. In the food section, there will be a special emphasis on fresh food, cheeses, breads, and fruit and vegetables. Shoppers can easily shop the essential ingredients and whip up a traditional British meal, such as the fish and chips or Sunday roast, by choosing from the classic British dishes offered in both the hot and cold food sections.
The children from the King’s College Doha have made the inaugural ceremony rich with live musical performances. The store was decorated with British Flags and pictorial representations of iconic landmarks of Great Britain to create the ambience of British architecture, culture, and tradition all along.
The state-of-the-art and award-winning logistics and warehousing facility of LuLu Group in Birmingham supports their entire hypermarket chain, which is why they offer shoppers the widest range of British products at the most affordable prices. Besides, Lulu Group has a comprehensive network of Export Distribution Centers in 22 countries including the major state of the art facilities recently opened in the US, Spain and Italy.