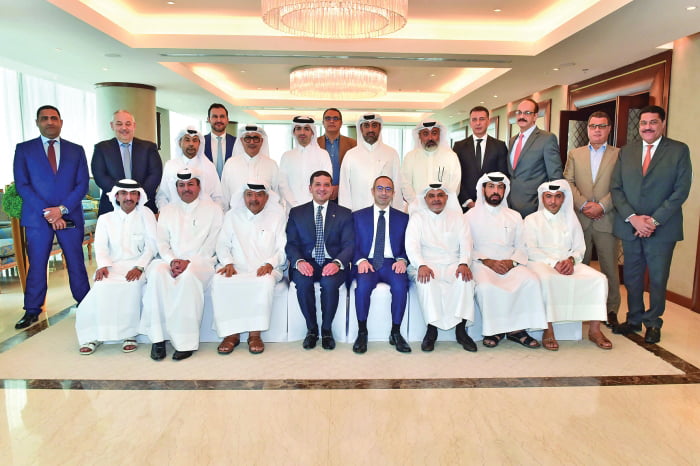 Investment relations between Qatar and Egypt have been bolstered further as the Qatari Businessmen Association (QBA) and the Egyptian General Authority for Investment and Free Zones (GAFI) held a meeting to discuss mutual opportunities and possibilities.
While the focus of the meeting stayed on strengthening bilateral investment cooperation, it saw the two sides agreeing to have mutual exchange of business visits to explore and identify potential investment avenues.
QBA Chairman Sheikh Faisal bin Qassim Al Thani headed the Qatari delegation, which included QBA members Sheikh Faisal bin Fahad Al Thani, Khaled Al Mannai, Salah Al Jaidah, Faisal Abdullah Al Mannai, Muhammad Khalid Al Rabban, Ibrahim Al Jaidah, Maqbool Khalfan, Abdullah Al Kubaisi, Youssef Ibrahim Al Mahmoud, and Ihsan Walid Alkhiyami. The meeting was also attended by Amaal CEO Rashid Al Mansori and Artic CEO Tarek Al Sayed.
GAFI CEO Mohamed Abdel Wahab highlighted investment opportunities in Egypt that might be of interest to Qatari investors, and that are aligned with the economic directions of the two countries, especially in the sectors such as chemical and petrochemical industries, financial services, logistics, real estate development, tourism, technology, agriculture, and other productive sectors.
Wahab said the Egyptian economy enjoys many competitive elements, on top of which are the investment and trade agreements that Egypt signed with the African and Arab neighbours during the past years, the economic reform program that the Egyptian government has efficiently implemented, and the huge investments in infrastructure that have contributed to improving the business environment in Egypt, as well as many new investment facilities and incentives approved by the Prime Minister to attract more local and foreign investments.
Wahab said that attracting investments requires searching for solutions to all the challenges and obstacles facing investors, and that the Egyptian Investment Authority, in accordance with the law, will solve all problems, adding: “We are keen on the speedy settlement of various disputes, as it starts first with friendly ways and then referral to the committee In the event that the conflicting parties do not agree, according to the decision of the Prime Minister, the new law protects investors and it is necessary to resolve any dispute within a maximum period of one month.
Fruitful cooperation
During the meeting, Sheikh Faisal bin Qassim Al Thani stressed the importance of economic cooperation between the two countries, praising the experience of economic reform implemented by Egypt over the past years, and encouraging Qatari companies to study promising investment opportunities in Egypt.
“Mutual economic opportunities between Qatar and Egypt are paving the way to strengthening cooperation in the trade and investment sectors, which contributes to strengthening of the economies and alliance capable of facing international challenges. In addition to the importance of Qatari investments in Egypt to support the two countries’ economies, the Egyptian labour force in Qatar is considered one of the most prominent supporters of Egypt’s economy. About 300,000 Egyptian workers work in Qatar and transfer about $1.3 billion annually to their country,” he said.
‘Private sector is invested in Egypt’
Sheikh Faisal stressed that the economic opportunities in Egypt are great and the Gulf countries are among the first investors there, and accordingly Qatar has this potential, and the opportunity is available to invest in agriculture, energy, tourism, food security and food industries, in addition to investments in water, communications and information technology, as well as in the real estate sector.
Abdel Wahab presented a specific set of investment opportunities to representatives of the Qatari Businessmen Association to study and choose appropriate projects for each investor according to his priorities, noting that it was agreed with the CEO of Qatar National Bank to form a working group to follow up and present opportunities periodically to Qatari companies interested in implementing new investments in Egypt or the expansion of existing investments. He also agreed with the Qatari Businessmen Association to form a mini-working group to study investment projects, whether in Egypt or Doha. He called on the members of the association to visit Egypt next September, the beginning of the government’s transfer of its headquarters to the new administrative Capital, which is also full of many important opportunities.