Opportunities galore for US firms in Qatar: Minister 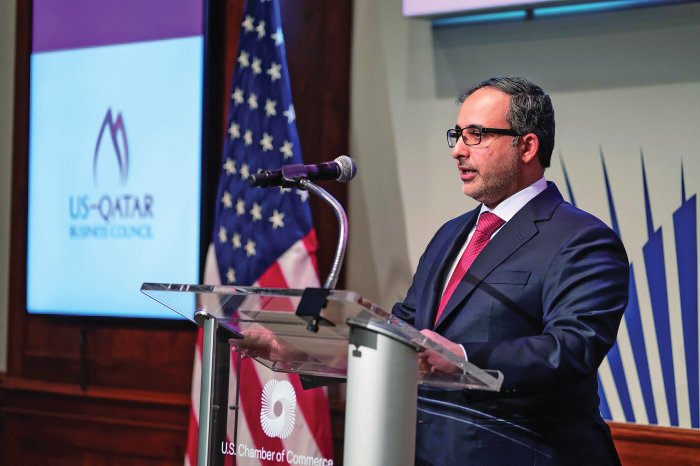 The US-Qatar Business Council (USQBC) and US Chamber of Commerce partnered to host a business reception featuring Minister of Municipality HE Dr Abdullah bin Abdulaziz bin Turki Al Subaie and attended by Qatar’s Minister of State and Chairman of the Board of Directors for Qatar Free Zones Authority (QFZA) HE Ahmad bin Mohammed Al Sayed.
The event was hosted at the US Chamber of Commerce headquarters in Washington, DC and was attended by members of both the Chamber and USQBC, private sector and government officials, both minister’s accompanying delegations, and the wider business community.
Speaking on the occasion, Al Subaie said, “Qatar cherishes its relationship with the United States. American companies have been partners in Qatar’s development for decades. Numerous new opportunities are emerging in food security, infrastructure, and many other areas, and Qatar welcomes American involvement.”
Khush Choksy, Senior Vice President – Middle East and Turkey Affairs, US Chamber of Commerce, said, “Qatar is a critical ally and partner to the United States, and the commercial relationship is an integral part of that partnership. The opportunities available to the private sector in Qatar are wide-ranging, and with the 50th anniversary of US-Qatar diplomatic relations this year, we are confident that US trade and investment with Qatar will continue to grow in sectors across the economy from digital to healthcare to infrastructure and everything in between.”
USQBC Managing Director and Treasurer of the Board of Directors Mohammed Barakat said, “The United States has been a key partner in Qatar’s ambitions targets for enhanced sustainability, mobility, environmental stewardship, food security, and infrastructure development. With Qatar’s continual focus on employing the most innovative technologies, we foresee many US companies taking advantage of the projects in Qatar in these areas, especially with the attractive facilities and incentives offered by Qatar Free Zones Authority.”
The FIFA World Cup Qatar 2022 has spurred a wave of infrastructure development in the country and is expected to attract 1.5 million visitors to Doha and generate billions in revenue for the Qatari economy. Sustainability and environmental stewardship are the driving forces behind the upcoming tournament with Qatar committing to host the first carbon-neutral FIFA World Cup. Similarly, recycling parts of the eight stadiums constructed for the tournament along with consumer waste generated during the tournament are poised to set new global benchmarks for waste reduction.
Qatar is a key investor in the agricultural sector in the US with large investments both in dairy and feedstock production. On the strength of the rapid development of its domestic agricultural sector, the country seeks to use its strategic geographic location, recent port infrastructure upgrades, and appealing business incentives to become a regional centre for value-added processing of food and agricultural products, with many opportunities for facilities to be placed in QFZA facilities.
In late 2021, QFZA signed an agreement with Aspiration, a US-based global leader in Sustainability as a Service, to expand access to sustainability services in the region, in line with QFZA’s efforts to develop the world’s first net-zero free zones, and part of a larger collaboration with Aspiration. QFZA has set forth its sustainability strategy with the goal to become the world’s most sustainable free zone group.
The bilateral business ties between the United States and Qatar continue to solidify with the total economic relationship between them exceeding $200 billion as of 2019. The US is Qatar’s largest foreign direct investor with a total of $110.6 billion in FDI and is the largest single source of exports to Qatar at $6.5 billion in goods in 2019. Today, more than 850+ US companies now operate in Qatar.