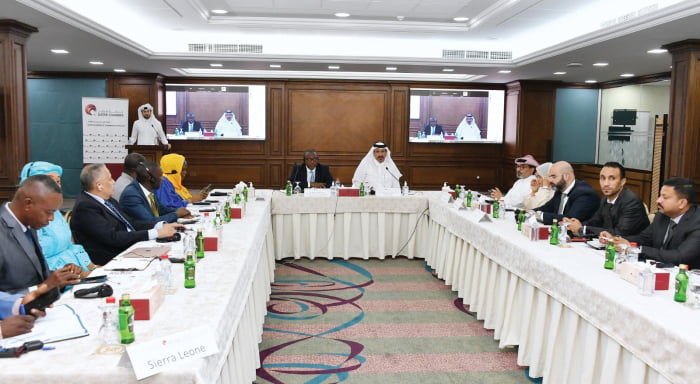 Sierra Leone is rich in diamonds, gold, iron and wood, and is a gateway to many African markets, its Minister of Trade and Industry Edward Hinga said as he called on Qatari investors to explore the opportunities in his country.
Hinga was addressing the Qatar-Sierra Leone Trade Meeting held online on Wednesday. The meeting was attended by a Qatar Chamber delegation led by its First Vice-Chairman Mohammad bin Twar Al Kuwari.
In the meeting, the two sides discussed the possibility of establishing partnerships between businessmen of the two countries and increasing trade and investment.
Minister Edward Hinga Sandy said the two countries had strong relations in many fields, and that there was a desire on the part of his country’s government to enhance trade and economic cooperation with the Qatari private sector, pointing out that there are many opportunities that businessmen can seize in order to establish commercial partnerships and alliances.
The minister expressed hope that the joint business meeting would produce results that would enhance commercial cooperation between the two sides.
Sandy highlighted his country’s openness to foreign investments, in light of the many factors favouring those wishing to invest in Sierra Leone — its geographical location, foreign capital protection system, taxation system and natural resources.
For his part, Twar said Qatar and Sierra Leone have close relations based on respect and mutual trust.
He said Sierra Leone provides significant opportunities for investment in domains such as agriculture, mining and natural resources, paving the way for the development of cooperation between Qatari and Sierra Leonean companies.
He expressed Qatar Chamber’s readiness to assist Sierra Leonean businessmen and investors wishing to establish direct or joint projects in Qatar. He also encouraged Qatari investors to invest in Sierra Leone, especially in light of the great importance the State of Qatar attaches to investing in Africa in general, adding in this context: “The State of Qatar has succeeded in achieving a number of achievements on all fronts, and its economy is witnessing a comprehensive renaissance thanks to its wise leadership and sound economic policies, which made it a leading regional and global centre for business and investment. Qatar developed its infrastructure on a global level and established free and industrial zones. It also issued many economic legislations and laws that created an attractive and investment-inducing environment.
The First Deputy of the Qatar Chamber called on Sierra Leonean companies to invest in Qatar and build partnerships with Qatari companies in many sectors such as industry, services, tourism, and others.
For his part, CEO of Sierra Leone Investment and Export Promotion Agency (SLIEPA) Sheku Lexmond Koroma, said that he headed a delegation comprising some government agencies, business owners, and investors from Sierra Leone aims to enhance trade and economic relations with the Qatari private sector, and to identify the possibility of establishing mutual partnerships that increase the volume of trade exchange between the two countries.
Koroma pointed out that the two countries have economic components and incentives that could form a basis for cooperation between Qatari and Sierra Leonean business owners. Koroma invited Qatari business owners to visit Sierra Leone and learn about the available investment opportunities closely.
During presentations, the Sierra Leonean delegation introduced the most important economic sectors in which Qatari investors can establish projects, the most important of which is the agricultural sector, which contributes about 60% of the national income, and that there are opportunities to invest in foodstuffs, including cocoa, which is the most prominent Sierra Leonean export, rice, grains, poultry, and vegetables.
The presentation also reviewed several promising opportunities in the tourism sector, as well as a presentation reviewing the features of the Sierra Leonean economy and the investment incentives provided by the government, introducing the tax system, exemptions, and facilities granted to foreign investments.