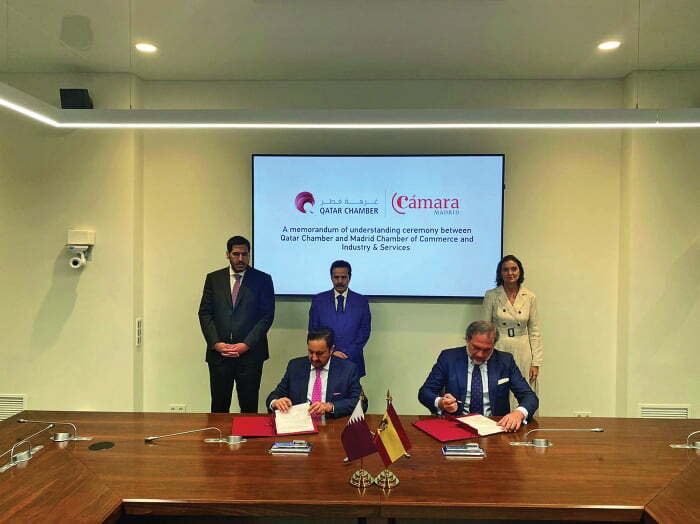 On the sidelines of the Qatar-Spain Business Forum held last week in Spain, the Qatar Chamber signed two memoranda of understanding with each of Spanish Chamber of Commerce and Madrid Chamber of Commerce, Industry and Services.
The agreements were signed by QC Chairman Sheikh Khalifa bin Jassim Al Thani in the presence of Minister of Commerce and Industry HE Sheikh Mohammed bin Hamad bin Qassim Al Abdullah Al Thani and Reyes Maroto, Minister of Trade, Industry and Tourism of Spain. QC Second Vice-Chairman Rashid bin Hamad Al Athba was also present at the ceremony.
The agreements aim to enhance economic and commercial cooperation between both parties, in a way that promotes both countries’ bilateral trade exchange.
Addressing the Qatar-Spain Business Forum, Sheikh Khalifa bin Jassim Al Thani said Qatar and Spain enjoyed close relations at all levels, especially on the economic and commercials aspects, noting that their bilateral trade exchange hit $1.2 billion last year compared with $820 million in 2020, an increase of 46 percent.
He also stressed the chamber’s support for forging business partnerships, which lead to establishing more joint investments whether in Qatar or in Spain. There are about 50 Spanish companies operating in Qatar in various sectors like trade, contracting, services, and furnishing, and consultancy.
“Spain is one of the most important destinations for Qatari investments. Qatar invests heavily in Spain and has many successful investments in many sectors such as real estate, financial services, and energy,” he said.
The Chamber chairman also indicated that the Qatari market welcomes more Spanish companies willing to invest in Qatar, affirming that Qatar offers world-class infrastructure, an attractive legislation framework, and plenty of investment opportunities in all sectors.
“The Qatari market is promising and attractive. There are a host of sectors in which Spanish companies can invest and benefit from incentives offered by Law No 1 of 2019, regulating the investment of non-Qatari capital in economic activity,” Sheikh Khalifa said.
Highlighting the incentives of investment granted by the law to the non-Qatari investor, he said it allows 100% ownership for foreign investors in most sectors and streamlines the allocation of land to a non-Qatari investor to establish his investment project.
It also enables the non-Qatari investor to import necessary equipment to establish, operate and expand his investment project and offers exemption from income tax and customs duties on imports of machinery and equipment necessary for their establishment.
Sheikh Khalifa invited Spanish companies to invest in Qatar, which offers significant opportunities for foreign investment in sectors such as food security, education, health, tourism, sports, infrastructure, and logistics, as well as other opportunities offered by economic, logistic, and free zones.