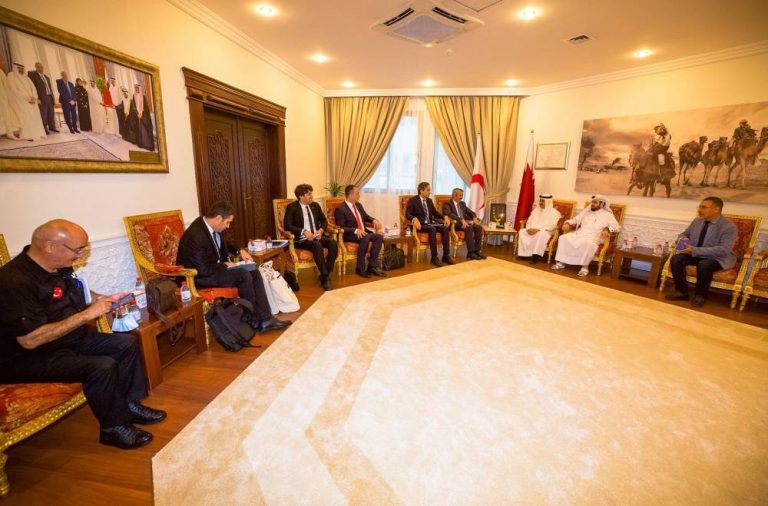 Qatar Red Crescent Society (QRCS) has signed an implementation cooperation protocol with Turkey’s Disaster and Emergency Management Authority (AFAD) to construct a residential village for displaced Syrians in Al-Bab City, Aleppo, with a total budget of $3,318,291.Currently, a high-level delegation from AFAD headed by Yunus Sezer, Head of AFAD is visiting Doha. They met Secretary-General of QRCS Ali bin Hassan Al Hammadi, CEO Faisal Mohamed Al Emadi, Director of Relief and International Development Division Dr Mohamed Salah Ibrahim and Director of Resource Mobilization Department Yousef Mohamed Al Awadi.“We at QRCS are very happy to pursue the existing cooperation with AFAD, which reflects the deep brotherly and friendly relations between the two countries and embodies our shared humanitarian goals, inspired by Fundamental Principles of the International Red Cross and Red Crescent Movement,” said Hammadi.He hoped that this joint effort would be successful, looking forward to further cooperation in defending humanitarian causes of common concern, particularly in responding to the humanitarian crisis suffered by the Syrian people for years now.Sezer praised QRCS’s great and diversified humanitarian experience, global presence in 41 countries, well-designed volunteering system and huge foreign assistance. “In the past, we worked together against the pandemic,” he said. “I know that Qatar has always been there for us in all the disasters that hit Turkey. Our bilateral cooperation would continue, not only for joint work, but as a result of our brotherly relations.”“Civilians, especially children and women, are the most affected by the conflict in Syria. We are here in an attempt to remedy their wounds. With this protocol, we are helping to alleviate the tragic suffering of our Syrian brothers. We have many ongoing projects in those areas to encourage the voluntary return of Syrian refugees. Thanks to this and other projects, we will be able to improve the living conditions of the people of Syria and help those willing to return to Syria,” Sezer added.The one-year project is aimed at securing livable shelters for 1,000 most vulnerable families in northern Syria, by building low-budget housing units, instead of the worn-out and flood-damaged tents, as well as providing infrastructure and basic services, so that those families can live in better conditions and a safer and more private environment.Targeting a total of 5,000 beneficiaries, the project involves several components, as follows:1. 125 two-story cement-brick buildings, each with eight 50-squaremetre flats, totaling 1,000 flats,2. One 600-squaremetre fully-furnished mosque.3. 24 20-squaremetre shops with a total area of 480 squaremetre.4. One two-story medical clinic with a total area of 500 squaremetre.5. One three-story primary school with a total area of 1,600 squaremetre.6. A drinking water supply and sewerage system as home infrastructure.7. One water tower with a 100-m3 tank.