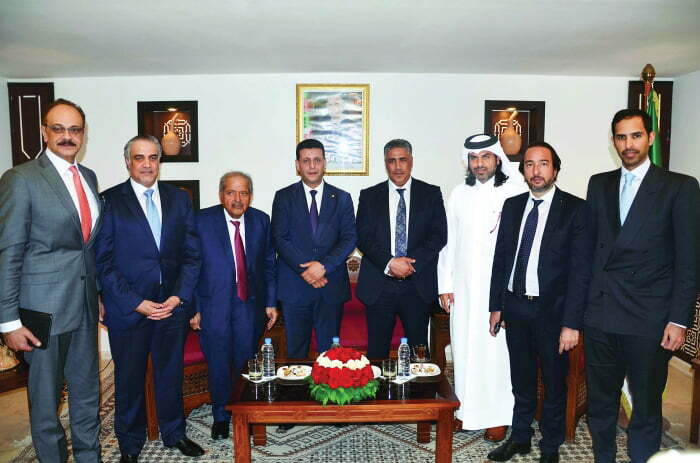 A delegation of Qatari Businessmen Association (QBA) led by its Chairman Sheikh Faisal bin Qassim Al Thani met with Algerian Minister of Tourism and Handicrafts Yassin Hammadi and Minister of Housing, Urbanization and the City Mohamed Tariq Belaribi.
The meeting, which took place in Algeria when the QBA delegation visited the country recently, discussed investment opportunities in the tourism and real estate sectors.
The delegation included QBA members Sheikh Mohammed bin Faisal Al Thani and Mohammed Moataz Al Khayyat, in addition to Sheikh Nayef bin Eid Al Thani, member of the Qatari Hotels Association; Tariq Al Sayed, Managing Director and CEO of Al Rayan Tourism Investment Company, and Rashid Al Mansouri, CEO of Aamal Holding Group. Ambassador of Qatar to Algeria HE Abdulaziz Al Naama also attended the meeting.
The meeting took place at the headquarters of the Ministry of Tourism, where Minister Yassin Hammadi gave a comprehensive presentation on tourism and hotel investment opportunities and partnership in the tourism sector. He also spoke about heat stations in the different states, especially in the states of the south and east of Algeria.
Hammadi said the meeting was an opportunity to value the strong relations already existing between the two countries, as “the two sides renewed their will to strengthen and intensify efforts to develop partnership and cooperation relations in a way that serves the interests of the two countries.”
Hammadi presented a number of areas ready for investment, including the Msida area near Annaba along the Tunisian border and the Ghar Daya area, in addition to other areas for medical tourism, hotel management and partnership with the public sector that owns a number of hotels.
For his part, Minister of Housing Belaribi affirmed that Algeria welcomes Qatari businessmen and actual partnerships between the two countries, especially in the sectors of tourism, handicrafts, housing and urbanization, in line with the two countries’ vision to create a strong partnership, especially after the visit of the President of the Republic, Abdelmadjid Tebboune to the State of Qatar during February 2022.
“Today, a new investment law is being studied. The law will allow foreign and Algerian investors to invest freely. We have attractive areas close to airports and transportation is available, and we have a new philosophy to create a new Algeria far from bureaucracy. The goal is to complete projects and overcome obstacles,” he said.
QBA’s Sheikh Faisal bin Qassim Al Thani suggested the establishment of an integrated touristic city, including a tourist port, and a Corniche that attracts visitors through the establishment of a public joint stock company in which businessmen from the two countries and others interested in Algeria contribute.
He also added that desert tourism, with small hotels in the desert governorates, will have a major role in promoting desert tourism. He stressed out that the global trend is to transfer state-owned hotels to the private sector for their management.
Tariq Al Sayed spoke about the company’s investments abroad. “We now own 36 hotels, the latest of which is a hotel in Italy, on an area of 100,000 square meters.”
Sayed pointed out that all countries offer incentives to invest in tourism, hoping that Algeria will follow the example of European countries so as to develop the tourism sector in the Arab world, especially Algeria, which has a large coast of more than 1,200 km.
The discussions touched on the issue of tourist visas, where the Minister of Tourism indicated that there is a tendency now to cooperate with tourism agencies in order to facilitate visas within 72 hours, and there is a future presidential approach towards the electronic visa.
The two parties agreed to form a working team of technicians to study the available projects to start practically laying the first foundations for investments. The teams included representations from the ministries of tourism and housing. Also a number of touristic resorts were visited in the capital and the Cherraqa region, also a visit to the city of Ghar Daya to see the existing resorts as well as the city of Wahran, where there are important tourism projects, especially that the city is about to host the Mediterranean Games, where a new solar-powered airport has been opened, and considered a precedent in African airports.