The Pearl Island records entry of 90 million vehicles since 2016 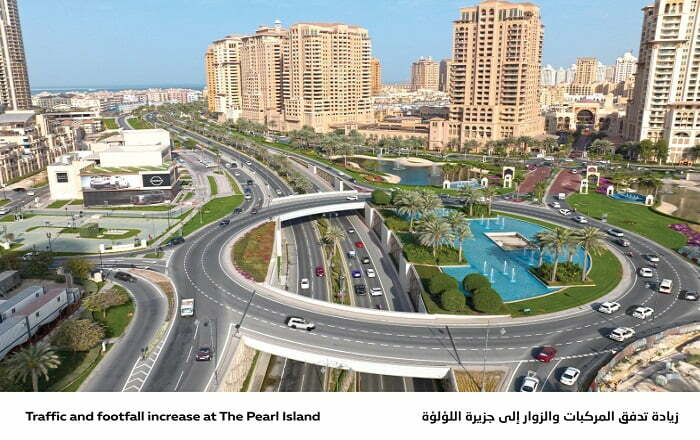 United Development Company (UDC), the master developer of The Pearl and Gewan islands, announced that nearly 90 million vehicles entered The Pearl Island since 2016.
According to 2021 figures, this constitutes an increase of 77 percent compared to vehicle influx in 2016, while UDC is expecting to receive a significant 19 million vehicles by end of 2022 based on traffic data collected thus far.
The number of vehicles is tracked through technologically advanced monitoring devices installed at the entrance of The Pearl Island. These devices registered an average 12% annual increase of vehicle influx over the past 6 years, covering visitors, tourists, residents, and employees.
The latest traffic data showed that January till May 2022 alone, recorded 8 million vehicle entries to The Pearl Island, compared to full-year figures of 9 million vehicles in 2016. Numbers are still expected to increase even more in the second half of 2022, with an even more promising ending by Q4 following the much-awaited FIFA 2022 World Cup.
The significant increase in resident and visitor influx to the Island has also contributed to an increase in retail activity, evidenced by the subsequent rise in the demand for leasing of shops and restaurants where 360 varied retail and F&B brands are currently operational across the three main retail hubs in Porto Arabia, Medina Centrale and Qanat Quartier.
The Pearl Island has equally launched various residential projects since 2016, leading to the achievement of the highest residential occupancy level of all time with a total of 52,000 residents. In this regard, the residential occupancy rate of UDC’s rented properties has now reached 93%, which reflects the Island’s leading position as a popular residence, retail and leisure destination.
With more residential and commercial projects in the pipeline, offering an estimated 5,700 residential units and serviced apartments, in addition to United School International, The Pearl International Hospital, as well as various hotel guestrooms, conference facilities, elegant ballrooms, shopping malls, retail and dining experiences; visitor influx into The Pearl Island is projected to continue growing at a progressive rate annually.