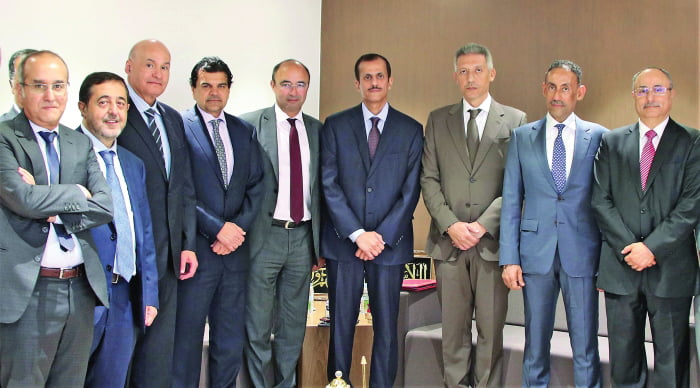 Umniah Bank has grown the number of branches in Morocco to 47 in the past few years, said QIIB Chairman Sheikh Khalid bin Thani bin Abdullah Al Thani, who was re-elected as the chairman of Umniah Bank at its AGM held recently in Casablanca.
Umniah Bank is a joint venture between Qatar International Islamic Bank (QIIB), Credit Immobilier et Hotelier (CIH) and the Moroccan Depository and Management Fund, with QIIB holding 40% of the capital.
Addressing shareholders, Sheikh Dr. Khalid said, “Umniah Bank has seen considerable success in the Moroccan market and made a quantum leap during the past years. We hope that our collective efforts will continue to gain momentum across all areas of business to deliver sustainable results and achieve targeted objectives.”
Talking about the growth in Morocco, the chairman said the bank continued to mark its presence throughout the country and provided superior customer service backed by quality and innovative propositions that met the highest global banking standards.
“Umniah Bank is committed to supporting the Moroccan business sector and will continue its efforts to expand this business segment through enhanced strategic plans, targeting opportunities that would create profitable growth and value addition to the Bank and its customers. Our focus, as a participative bank, is to facilitate financing to projects and businesses with productive and sustainable purposes and remain faithful to our commitment to supporting the growth of the Moroccan economy,” he added.
“Customers’ interest in the services and products of Umnia Bank indicates that the Moroccan market is a privileged environment for participating banks. Indeed, the market provides valuable opportunities and incentives for business growth and expansion in the participative banking sector. Umnia Bank is building on those opportunities and factors to achieve its strategic objectives and strengthen its future growth for the years to come.”
Sheikh Dr. Khalid thanked the executive management of Umnia Bank for their efforts in developing the business processes and implementing the plans approved by the Supervisory Board.
He urged all employees to enhance their efforts to optimise the bank’s efficiency and increase its positioning across the Moroccan market.
He also expressed his thanks and appreciation to the supervisory and regulatory authorities in Morocco for their assistance and support to Umnia Bank in particular and their valuable vision on attracting foreign investments and fostering a healthy competition environment in the Moroccan economy.
Following the general assembly meeting of Umnia Bank and the selection of the Supervisory Board for the next three years, the Board held a meeting approving the bank’s first quarter financial results for the period that ended on March 31, 2022.
The board also approved the formation of new Board committees, namely the Investment and Strategy Committee, the Nomination and Remuneration Committee, and the Audit and Risk Committee.
Sheikh Dr Khalid bin Thani bin Abdullah Al Thani chaired the meeting, during which the shareholders reviewed and discussed the Bank’s plans, strategy and financial results for the previous period. The shareholders also selected the members of the Bank’s Supervisory Board for the next three years.
While Sheikh Dr. Khalid bin Thani bin Abdullah Al Thani was appointed as chairman of the bank’s Supervisory Board and Lotfi Sekkat was re-elected as Vice Chairman of the Board.
The other members of the board are Ali Bin Abdul Latif al-Misnad, Dr. Abdulbasit Ahmad al-Shaibei, Younis Al Zubair (representing CIH), Khaled al-Hattab (representing Depository and Management Fund), Mustafa al-Haboubi, Khaled Benala, Mona Hammoud and Jamal Lamradi (independent member).